Design and Construction of the High-Voltage Power Transformer 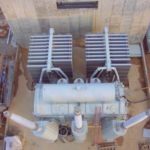 The power transformer is used throughout the electrical grid. They increase and decrease voltages electromagnetically to transmit and distribute power more effectively. As electricity leaves a power plant, a generator step-up (GSU) transformer increases the voltage for long-distance transmission. In mobile substations, distribution transformers reduce the voltage for down-stream consumption. Between generating stations and consumers, power can go from 550 kV to 120 volts. In addition to modifying voltages, transformers can switch between three-phase and single-phase outputs.

Transformers use magnetic fields to alter voltages. First, current passes through the primary coil. With help from a metallic core, the magnetic field transfers energy to the secondary coil. Depending on the configuration of the second coil, the transformer will increase or decrease the voltage.

The process of transferring voltage is based on an electromagnetic principle called mutual induction. This phenomenon requires a properly sized magnetic core, which is usually made from iron or another ferromagnetic material. The coils are electrically separate, but they are linked magnetically since the core provides a path through which the magnetic flux flows.

During this process, some energy is lost due to resistance. Hysteresis loss produces significant amounts of heat. To counteract this problem, the coils are surrounded by a medium that dissipates the heat via convection. Power transformers used in a mobile substation today might use oil or sulfur hexafluoride (SF6) gas to manage the heat. Some systems cool the power transformer with a blast of air.

Regardless of their size or capacity, there are two types of power transformers. In a core-type transformer, primary and secondary windings surround separate core arms. In a shell-type transformer, the windings share an arm. Cylindrical coils can be configured concentrically over one another. Some high-capacity transformers use a disc configuration where coils are wound in alternating layers.

Three-phase transformers with a total of six coils lend themselves well to triangular delta and wye configurations. They can be engineered with any permutation of these connections in the primary and secondary coils, such as delta-delta, wye-wye, delta-wye and so on. Three-phase power transformers can have a wye or delta primary coil with a single-phase output. Transformer windings can also be designed to comply with international electrical standards.